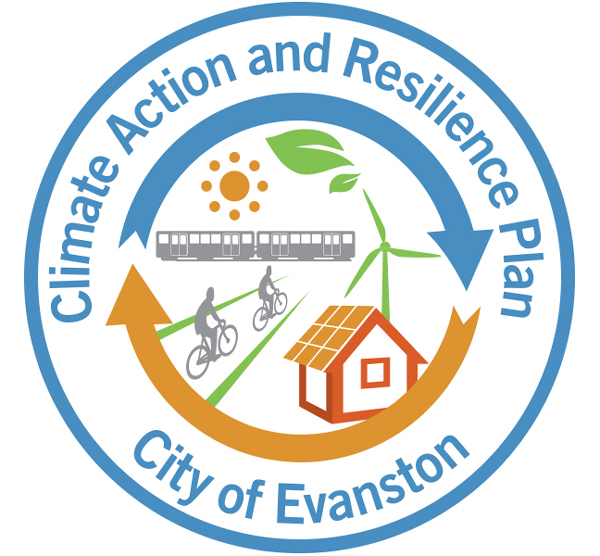 The Evanston City Council on Monday continued the City’s strong leadership on climate issues by unanimously approving the Climate Action and Resilience Plan (CARP), a comprehensive plan to reduce Evanston’s impact on global climate change while preparing the community for its effects.

The plan, available at cityofevanston.org/climate, provides concrete actions the City and its community partners will take to meet ambitious climate action goals over the next three decades. In adopting the plan, Evanston became the first Illinois city to set a goal of achieving 100 percent renewable electricity for all properties, aiming to do so by 2030, and the first to target zero net emissions, or carbon neutrality, with plans to achieve that goal by 2050.

A 17-member, resident-led CARP working group, initiated by Mayor Stephen Hagerty, led the yearlong, communitywide effort to create the plan, which includes commitments from some of Evanston’s largest employers.

“From our residents, to our businesses, to our schools and hospitals, Evanston is united in its efforts to mitigate the far-reaching effects of climate change through bold and immediate action,” said Mayor Hagerty. “While Evanston will likely undergo many changes on the way to 2050, this plan ensures that our longstanding commitment to climate action will remain.”

The Climate Action and Resilience Plan builds on the success of Evanston’s 2008 Climate Action Plan, initiated by Mayor Lorraine H. Morton, and the 2014 Livability Plan, initiated by Mayor Elizabeth Tisdahl, which together resulted in a 24 percent reduction in greenhouse gas emissions relative to 2005 levels. The City’s newly adopted plan charts a path forward to continue reducing harmful greenhouse gas emissions generated in Evanston, while also addressing other climate-related issues, including waste diversion, green infrastructure, transportation and mobility, and natural environment.

In addition to achieving carbon neutrality by 2050 and 100 percent renewable electricity by 2030, other goals of the plan include:

For the first time ever, the City’s climate plan also includes steps to ensure that Evanston is adequately prepared for the effects of climate change. According to reports from the Fourth National Climate Assessment and the Great Lakes Integrated Sciences and Assessments (GLISA), Evanston will experience intense storms, extreme heat and future drought conditions as climate change continues. CARP identifies Evanston's most vulnerable systems and populations and identifies strategies to prepare the community for those climate hazards. The plan includes goals related to emergency preparedness and management, community outreach and education, health, and other areas.

The adoption of Evanston's Climate Action and Resilience Plan continues the City's leadership on climate and environmental issues. Since 2006, with the signing of the U.S. Conference of Mayors' Climate Protection Agreement, Evanston has achieved certification and recertification as a 4-STAR sustainable community, been named the World Wildlife Fund's 2015 U.S. Earth Hour Capital, joined the Global Covenant of Mayors, and served as a founding member of the Mayors National Climate Action Agenda (MNCAA). In 2017, Mayor Hagerty joined municipal leaders from across the world in signing the Chicago Climate Charter, pledging to uphold the commitments of the Paris Climate Agreement. The mayor has also committed to the Sierra Club’s Mayors for 100% Clean Energy initiative, supporting a communitywide transition to 100 percent renewable energy.

For more information on the City's climate action efforts, please call or text 847-448-4311. For convenience, residents may simply dial 3-1-1 in Evanston.