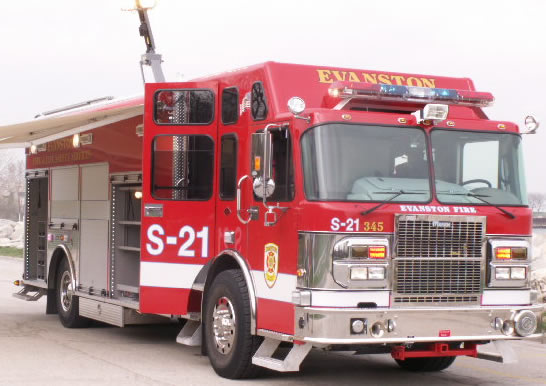 The Evanston Fire Department (EFD) has a rescue squad in its fleet.

The new vehicle replaces a 1977 panel van and a 1979 converted ambulance used by the Dive Team and for a Mobile Air Cascade Unit. The squad supports the special teams of the EFD, including dive, high-rise and trench rescue, and hazmat.

The vehicle was designed to meet the needs of the Evanston community. From the beginning of the design phase through to the end result of the new vehicle, EFD members lent their input and experience to tailor the squad to meet their specifications.

Its mobile cascade system was used in a recent crisis in one of the neighboring communities and filled 37 cylinders with air in less than half an hour.

The compartments inside and outside house specialty tools, dive suits, scuba tanks, air system, a lighting system that elevates to illuminate an incident 360 degrees, a canopy for shelter and shade, winch system with an electric motor for special rescue, extrication tools and more.

The rescue squad was purchased in part with a federal grant from the Emergency Preparedness and Response Directorate through the Assistance to Firefighters Grant Program. The Foreign Fire Tax Board also provided funds to purchase some of the equipment for the actual vehicle.

The squad is currently housed at Fire Station #1 on Emerson.