Used by various communities to get citizens’ attention in time of threatened or impending natural disaster, such as tornado or other emergency situation. The signal is a steady siren blast for three to five minutes. Warnings of natural disaster, which affect Evanston, are also transmitted over radio and local and cable television.

In the event of an enemy attack upon the United States, Evanston citizens will be alerted by this signal: a three-minute wavering or intermittent siren blast. 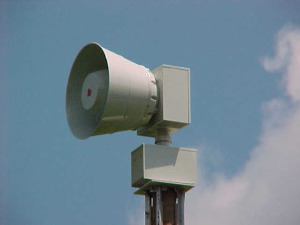 Sirens can also be heard during a test of the Outdoor Warning Systems on the first Tuesday of each month at 10 a.m. They consist of one minute “alert” signal (continuous siren blast), one minute of silence and one minute of “take cover” signal (wavering siren).

The City of Evanston sounds its sirens in the event of a declared snow alert. Evanston sirens sound 15 minutes after certain hours for:

The Village of Skokie sounds their sirens on the hour for various snow parking bans. Please keep this in mind as many Evanston neighborhoods can hear Skokie's sirens.