The City of Evanston was founded in 1853; incorporated in 1863. "The Town Board was petitioned to purchase a Babcock Fire Extinguisher or other machine as the nucleus of some sort of Department in November, 1872. The Evanston Fire Department began as a volunteer department, May 25, 1875. In 1879 efforts were put forth to organize a regular Fire Department connected with the Water Works by telephone communication. A volunteer hook and ladder company was formed and accepted by the Village in April, 1881." As Mr. Russel Crouse wrote in the Currier and Ives, "Life of a Fireman" lithograph series, "the Fire Department Volunteer Organization was born of civic pride, and into it crowded the fathers and sons of the best families of the day. They received no pay, but membership was considered an honor."

Evanston Fire Department Rules and Regulations of the 1900's required that horses be walked at intersections and curried and feed every evening. Evanston at the time was largely farmland with a large portion of the land for vineyards and orchards.

However, Evanston also had a large financially wealthy population living along the lakefront and throughout the city. Stately Victorian homes are dotted throughout Evanston with many listed on the historical register. Several, such as the Charles Dawes Mansion was home to General Dawes who served as Vice-President under Calvin Coolidge. It was built in 1894, and is now home to the Evanston History Center and Frances E. Willard home built in 1894 is now a national shrine. 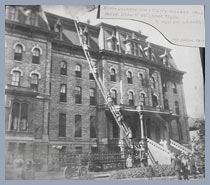 Northwestern University was chartered in 1851 as an independent, privately controlled University. "Originally only liberal arts were taught and Northwestern University pioneered in professional education by establishing schools in Medicine, law, speech, dentistry, music, management, engineering, journalism, and education." Evanston has been known as a college town, with the educational community still a prevailing fixture in the nature of the community. Other centers of leaning include: National Louis University (formerly National College of Education) 2840 Sheridan Road was founded in 1886; Garrett Theological Seminary, 2121 Sheridan Road, since 1853; Seabury Western College, 2122 Sheridan, and Kendall College of Culinary Arts (formerly Kendall Junior College) 2408 Orrington. Bookstores and Coffeehouses are still one of the most popular meeting places in the area. Northwestern still owns a large amount of property in Evanston, and continues to develop large building projects such as the Research Park, Science Buildings, Kellogg Center, and the Technological Institute.

On September 1, 1924, a new 85' Aerial Ladder was placed in service. Two additional men were placed on the Evanston Fire Department to man the new truck. In 1927, with the addition of 20 new members and two additional 1000-gallon pumpers, the Department reached a total of 84 men in service. The City found it necessary to reduce the personnel during the Depression to a total of 78 men. In 1937, the two new 750-gallon Seagrave Pumping Engines and one 65' Aerial Ladder truck were placed in service. These new pieces of apparatus were equipped with cab for driver and officer.

"During 1940 through 1955, the Evanston Fire Department operated seven pieces of fire apparatus and had a total personnel force of 84 positions. Personnel were 1 Fire Chief, 1 Assistant Chief in Fire Prevention, 80 suppression personnel (Firefighters, Lieutenants, and Captains), and 2 Shift Commanders in suppression. Each of the 82 suppression personnel worked 84 hours per week on a 2-shift system. This resulted in a maximum of 41 personnel being available on each shift. Five personnel per shift were assigned to each of the seven pieces of fire apparatus, and were supervised by one Assistant Chief serving as a Shift Commander."

In 1956, a State of Illinois law mandated a maximum 56 hour work week per position for paid Fire Department personnel in cities of 5,000 population or more. This law required the addition of a third shift to the Evanston force. A rescue squad was added for a total of eight pieces of fire apparatus and eighteen positions were added to the Department. Fifteen positions were added to Suppression; two men were added to Fire Prevention; and a Training Officer position was created.

Equipment in 1975 consisted of five engines, two trucks, one squad, an amphibious vehicle (a DUKW), and reserve equipment. In 1976, the Emergency Medical Services (E.M.S.) Division was created, and thirteen new positions were established. These positions included twelve men to staff the new ambulances, and one Captain to supervise the E.M.S. Department. Further reorganization also took place. Two of the three Suppression/Assistant Chiefs/Shift Commanders were assigned administrative duties. 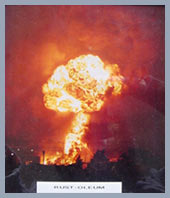 Fires are more than large monetary losses to buildings. Members of the Department remember more than just hose streams. Members, who responded to two Rustoleum Corporation fires in 1976 and 1977, recall large aerosol cans firing into the air like bullets in between normal fire containment. Bowman Dairy Building, 1922 Ridge in February of 1974 had firemen responding to call-back's after a retirement party to a fire in below zero weather with high wind chill factors. The chins, clothing, and even mustaches of firemen were covered with ice. Firefighting is a dangerous profession. In 1985, the Fire Department experienced the tragic death of Firefighter/Paramedic Marty Leoni at a house at 1927 Jackson. Firefighter Leoni's portrait is displayed in City Hall at 2100 Ridge. In addition, a Fallen Firefighters' Memorial was dedicated on July 23, 1993 in Fireman's park at the corner of Maple & Simpson to honor Evanston Firefighters who have lost their lives in the line of duty.

At the present time, the Evanston Fire Department consists of 109 members, 61 of which are paramedics. The Evanston Fire Department in 1999 responded to 7,451 requests for service, with 4,513 of those requests being Emergency Medical Service calls. Evanston Fire Department members must have both firefighting and emergency medical knowledge since there is a large workload and overlapping in both the business of fighting fires and responding to Emergency Medical calls. "The relationship between houses, apartments, businesses, parks, schools, and institutions, the amount and intensity of each use, the quality of services provided and physical conditions have much to do with the character of the community."

New purchases of equipment are an on-going matter. A recent purchase was a new Engine with a 50-foot ladder and master streams capability called a tele-squirt. Two new ambulances were received in 1999. The new ambulances are equipped with heavy-duty chassises, higher riding capability for drivers, and more modular headroom in the ambulance itself. Mobile Data Terminals (M.D.T.'s) have been installed in many Fire Department vehicles linking the equipment with the Dispatch Center. Evanston is acquiring the capability required to utilize modern technology and new tactical approaches to collect and analyze the extensive data needed for effective and efficient fire operations on a day-to-day basis.

However the duality of the Evanston Fire Department reflects that in addition to equipment, Emergency Medical and firefighting needs, personal service to its citizens is an increasing and ambitious part of this Department. Community involvement with the Evanston Fire Department has increased one hundred-fold since the 1950's. Both fire and EMS calls are not the only demands this Community makes. Citizen's want our increased participation in Fire Prevention programs and projects, home security, preservation issues, ecological and environmental concerns, e.g. Clean Air Act, asbestos removal, Hazardous materials information and disposal, building construction, and the continued issues of Fire and Life safety.

As a result of fire investigations and data analysis, the Evanston Fire Prevention Bureau was responsible for identifying halogen lamp hazards in 1993 and since then, the lamps have been redesigned and are now much safer for the consumer. In addition, the Division was also involved in the research of Carbon Monoxide Detectors when they first came out. Our data collection was instrumental in identifying problems. We continued to work with Underwriter's laboratory, the Gas Research Institute, and other agencies until Carbon Monoxide Detectors evolved into the reliable life safety devices that they are today. Evanston has always been a forerunner in Fire Prevention activities and continues to try ambitious projects to keep its visibility in the Community.