The City of Evanston's Parks Division

Enjoy a visit to one of the City of Evanston's many lovely parks! Please note that dogs must be on leash.

The Parks Division provides the horticultural maintenance of all public grounds within the City. Over 300 acres of land, encompassing 97 sites, are maintained by employees assigned to this business unit. These sites include 76 parks, 50 playgrounds, nine roadside plantings, the grounds of eight public buildings, and four civic beautification plantings.

The major components of horticulture maintenance are lawn care, small tree, shrub and ground cover care, perennial bed maintenance, weed control, and the pickup of more than 400 refuse containers from all park properties.

Employees assigned to this unit also assist in citywide snow removal and recreation facility maintenance when necessary. Additionally, employees maintain the equipment used for the upkeep of the grounds, and make repairs to all the different site furnishings such as playground equipment, picnic tables, park benches, and fencing. Employees also oversee landscape and irrigation system maintenance contracts.

Four tennis courts have lights and are located in parks that are open from sunrise until 10pm: Robert Crown, Fitzsimons, Foster and Leahy. The button-activated lighting system does not function after 10pm. The lighting system will only be operational from April 1 - November 30, each year. Half of the tennis nets are left in place year round, in case the weather is suitable for play.

The only location in Evanston that has a lighted basketball court is Mason Park, which is located at the corner of Church Street and Florence Avenue (a few blocks east of Evanston Township High School).

Are you interested in making a donation in honor of a birthday, anniversary or graduation? Would you like to create a lasting memorial to a loved one? You can donate a tree or dedicate a bench in one of Evanston's lovely parks. Visit Support Your Parks for for more information.

Dogs in the Park

If you would like to have your dog off leash, annual memberships are available for Pooch Park.

Noah's Playground for Everyone

Noah’s Playground for Everyone is located in Lawson Park, which is at Sheridan Road and Clinton Place, just north of the Grosse Point Lighthouse. Noah’s Playground for Everyone is a fully-accessible playground. It gives an opportunity to all children, no matter their physical circumstances, to engage with others and for families to have fun and grow together. The picture to the right was taken at the dedication ceremony in June 2008. 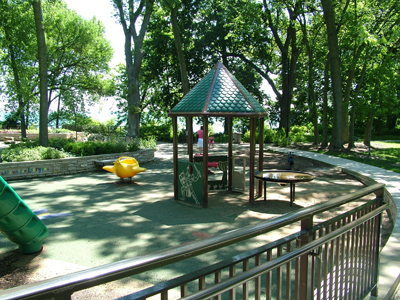 Most importantly, this playground allows all kids to be real kids and do what they do best—play, learn, and become the best people they can be. Funding for this project came from private donations in memory of Noah Cutter and the City’s Capital Improvement Program. Construction was completed in 2008.

In September 2012, Evanston’s very own Noah’s Playground for Everyone won a Reader’s Choice Award in Time Out Chicago Kids’ 2012 Hipsqueak Awards. It was chosen as the “Best Playground” in their inaugural awards contest, honoring the best in family-friendly arts, entertainment and advocacy in the Chicago area.

In July 2014, Noah's Playground for Everyone was announced as Make It Better's Best of Kids selection. It will be promoted in the August 2014 issue.