The Merrick Rose Garden features hundreds of beautiful rose bushes, as well as the historic Fountain Square Centennial Fountain. The Garden is located at Lake Street and Oak Avenue, one block east of Ridge Avenue. In 2003, new garden lighting and irrigation systems were installed and the retaining walls were reconstructed. The Merrick Rose Garden is a popular location for small weddings or special occasions, as well as for wedding photographs.

The City of Evanston Parks/Forestry and Recreation Department starts booking rentals for the Merrick Rose Garden in January for that year.

The garden may be rented on a Friday after 3:30pm, Saturday or Sunday.

Only one group a day is allowed a special permit for the Garden and the public must be allowed access to the Garden.

If you would like to use the Rose Garden for your photos or special event, reserve the garden and pay the fee. These funds are used by the Parks/Forestry Division to maintain the garden.

The Centennial Fountain is associated with a tradition of public commitment. The original Centennial Fountain was purchased by public donations in 1876 in honor of the nation’s Centennial. It was located in what became known from then on as Fountain Square (located at the intersection of Orrington and Sherman Avenues and Davis Street).

In 1912 the fountain was badly deteriorated and was replaced with a replica. The fountain was frequently threatened by modernization plans and each time concerned citizens came to its rescue. In 1946 the fountain was removed and put into storage. However, Evanstonians could not let it be forgotten.

In 1950 a successful fund drive, including a $5,000 donation from Vera Megowan, enabled the fountain to be restored. The Centennial Fountain was moved to the Merrick Rose Garden and was rededicated on July 4, 1951, which was 75 years after its dedication in Fountain Square in 1876. The original plaque as well as a new bronze plaque were installed in the garden.

In May 1987 redevelopment began at the Garden. The Fountain was suffering from decay and vandalism. The future of the cast iron fountain was slowly eroding. Therefore, a group of 15 local non-profit organizations banded together and formed the Centennial Fountain Restoration Coalition. The Coalition raised $30,000 to restore the Fountain! The Merrick Rose Garden and Centennial Fountain were rededicated on July 4, 1988.

The Fountain was renovated again in 2000. It was stripped to bare metal and received a more historically-accurate paint job. In addition, the fountain underwent a mechanical renovation.

History of the Merrick Rose Garden 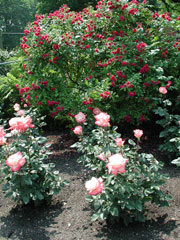 In July 1948, the Merrick Rose Garden was dedicated in honor of Clinton Merrick, a prominent attorney and second ward alderman for 23 years. The original rose garden was designed by Ralph Melin, the City’s landscape architect. The original garden had over 1,000 roses in 48 varieties, which were selected by C. Eugene Pfister, president of the National Rose Gardens Association.

In 1969, the Rose Garden contained 1,200 roses and 65 varieties. In 1985, an early frost killed many roses. In May 1987, redevelopment began in the garden, including a new brick outer wall with wrought iron fence and an irrigation system. Bricks were recycled from the old brick city streets. The fountain was refurbished at a cost of $30,000 (see “History of the Fountain,” above). Garden clubs and individuals donated over $8,800 for new plantings. The Merrick Rose Garden and Centennial Fountain was rededicated on July 4, 1988.

In 2003, new garden lighting and irrigation systems were installed and the retaining walls were reconstructed. In 2004 the garden contained approximately 2,000 roses and 200 varieties.

The Merrick Rose Garden is an All American Rose Selections, Inc. (AARS) display garden. The AARS is a not-for-profit consortium of growers and hybridizers. Each year the AARS selects and donates new varieties of roses for the Merrick Rose Garden to display the year before they are available in retail outlets. The new roses are identified in the garden, so you can pick your favorite to grow in your own garden next year!