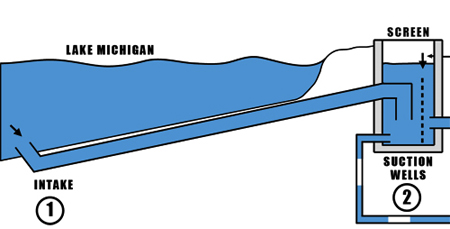 Water is drawn from Lake Michigan through three large intake pipes which are laid in trenches along the lake bottom. The water enters the pipes though the multiple openings at the outer end. 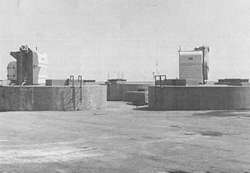 Lake water flows by gravity though the intake pipes into three suction wells. The concrete cylindrical north and south wells are 22 feet in diameter and 74 feet from top to bottom. Both wells have mechanical traveling screens and three rows of stationary screens to remove any trash from entering the raw water (low lift) pumps. A new suction well was added in 1975 for the new 54" diameter intake and is 20 feet in diameter and 52.5 feet from top to bottom. This well connects to each of the other two wells to utilize their screens so that all raw water passes through them on its way to the low lift pumps. Activated carbon can be added in the suction wells for longer contact with the water to remove taste and odor. Polymers can be added to the raw water at this point to aid coagulation. 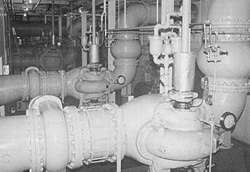 Six electric centrifugal pumps are provided to lift the water from the lake to a level that it can flow by gravity though the treatment plant. Capacities range from 15 to 30 million gallons per day (mgd), or a total capacity of 130 mgd. Four of the units have auxiliary engine drives for emergency operation in case of a power failure, providing 70 mgd emergency capacity. 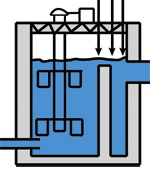 This is a concrete tank about 15' x 15' x 24' deep and having a vertical paddle driven by a motor on the deck above. This is the point where treatment begins and is where accurately measured amounts of liquid aluminum sulfate, chlorine and fluoride are added to the raw water. The chlorine is for disinfection and oxidation of organic materials. This is the first application and is called the pre-chlorine treatment. The aluminum sulfate is added to form a precipitate or floc in the water. This action causes the suspended solids to settle out. The flash mix paddle helps to start this chemical reaction with the aid of the polymers added at the suction wells. Fluoride is added to help reduce the incidence of dental decay. 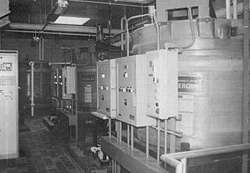 The water next flows to the slow mix basins which are large chambers containing slow moving horizontal paddles. It is here that the chemicals are mixed and the floc increases in size before entering the setting basins. 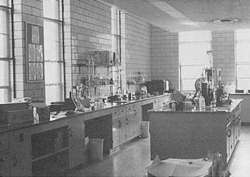 Upon leaving the slow mix basins the water enters the four large settling basins which have a total capacity of 14,330,000 gallons. It takes 4 to 8 hours for the water to flow though the settling basins, depending on the pumpage. This gives ample time for the floc to settle, carrying with it suspended matter, bacteria, and algae. In this process over 90% of all suspended impurities are removed. Twice each year all basins are drained one at a time and the accumulated sludge is washed out. 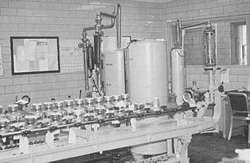 The sludge that is periodically cleaned from the setting basins is now pumped through an 8" force main into a large interceptor sewer. This sludge is then treated and disposed of along with domestic sewage by the Metropolitan Water Reclamation District of Greater Chicago at their local facilities.
Meter Shop 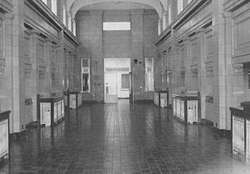 The water next flows to the rapid sand filters where the last traces of turbidity and bacteria are removed. There are 24 filters operating in parallel for a total rated capacity of 108 million gallons per day. The filters are constructed in shallow concrete tanks with an underdrain system at the bottom, followed by a layer of graded gravel on which is placed 28 inches of filter sand. Each of the filters include a 6 inch layer of anthracite coal on top of the sand which lengthens the filter run. The rate of filtration is two to four gallons per minute per square foot of filter area. When clogged, the filters are backwashed by reversing the flow for about 8 minutes. Four pumps take filtered water from the reservoir for backwashing. The average filter wash takes approximately 100,000 gallons and total wash water use is about 2% of plant output.

The detention tank was designed to collect all the filter wash water and in so doing to stop all filter water from going to Lake Michigan. The water is allowed to flow by gravity to the north and south suction wells. In this way wash water is recycled back into the incoming raw water at approximately 10% of total raw water intake. The 80'W x 192'L x 12'D tank is divided into two sections to allow one section to be taken out of service for cleaning and inspection. A 700 gpm pump discharges the sludge to the basin sludge drain. 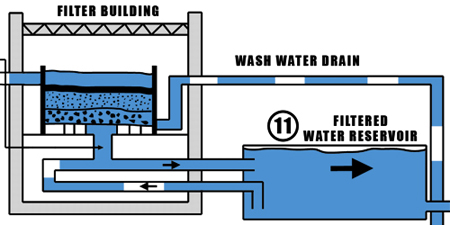 Clear well reservoirs beneath the filters and an underground storage space provide 9,500,000 gallons of reserve from which the distribution system is supplied. Before entering the reservoirs a final post chemical treatment of chlorine can be added. 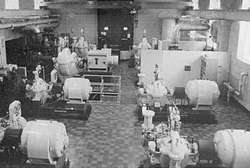 Nine centrifugal pumps, having a total capacity of 147 million gallons per day, supply water pressure at 50 to 65 pounds per square inch to the distribution system. Four of the units are equipped with auxiliary engine drives for emergency operation in the event of a power failure, providing 67 mgd emergency capacity. 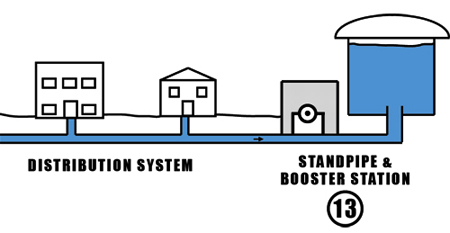