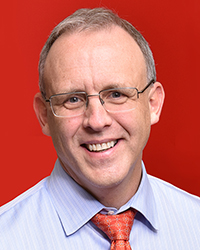 Stephen Howard Hagerty is the 21st Mayor of Evanston, IL. As Mayor, he works closely with the Evanston City Council, City staff, residents, schools, businesses and organizations to help create a city that is more just, vibrant, inclusive and equitable.

During Mayor Hagerty’s tenure, the Evanston City Council has approved transit-oriented residential developments resulting in over 1,000 new housing units, increasing density to better support Evanston businesses and expanding the City’s tax base. Evanston’s commercial vacancy and unemployment rates are among the lowest in the Chicagoland area, while City revenues from sales, hotel, liquor and amusement taxes have increased. The City has expanded water sales to three new municipal customers, generating $50 million in additional revenue over the next 40 years. Lastly, residents now enjoy a renovated downtown Fountain Square and a complete streets approach, including new bike lanes, along Chicago Avenue and Sheridan Road.

In 2018, Evanston became the first Illinois city to target 100 percent renewable electricity and net zero carbon emissions with the adoption of its Climate Action and Resilience Plan. The City has worked to ensure equity and opportunity for all residents, strengthening its Welcoming City Ordinance, establishing an Equity and Empowerment Commission, and expanding opportunities for career success through the Mayor’s Summer Youth Employment Program, increased records expungement, implementation of an Alternatives to Arrest process, and the launch of the Elevate Evanston workforce development initiative. These efforts have led to better outcomes for Evanston youth ages 16-24, including a decrease in arrests from 771 in 2012 to 336 in 2018.

Mayor Hagerty is proud of the City’s excellent public safety services, which continue to progress to meet the community’s needs. The Evanston Fire Department recently achieved a Class 1 Fire Protection Rating, placing it in the top one percent of departments nationwide, and all Evanston police officers were outfitted with body cameras, increasing transparency and accountability for all parties.

Prior to assuming elected office, Mayor Hagerty founded Hagerty Consulting, one of the nation’s leading emergency management consulting firms, helping communities prepare for, respond to, and recover from disasters. He has led some of the nation’s largest, most complex, and most successful recovery efforts, including the $7.4 billion 9/11 World Trade Center disaster, the $1.4 billion Hurricane Katrina Special Federal Community Disaster Loan Program, and the $15 billion NYC recovery after Superstorm Sandy.

Mayor Hagerty is a Fellow of the National Academy of Public Administration, a Member of the Board of Advisors at the Maxwell School of Citizenship and Public Affairs at Syracuse University, a former board member of Evanston First Bank & Trust and Youth & Opportunity United (YOU), and the former President of the Evanston Chamber of Commerce.

Steve and his wife, Lisa, moved to Evanston in 1999 for Lisa to study at Northwestern University. They quickly realized this would be a wonderful City to settle down, start a business, and raise a family.

On June 3, 2018, Mayor Hagerty delivered the commencement address to the ETHS Class of 2018. Read his remarks or watch the video below.

2019 State of the City Address

On March 8, 2019, Mayor Hagerty delivered the 2019 State of the City address. Read his remarks and watch the video below.

Past State of the City Addresses

2018 State of the City Address

Messages from the Mayor

Subscribe to the Mayor's e-newsletter here. View past Messages from the Mayor below.